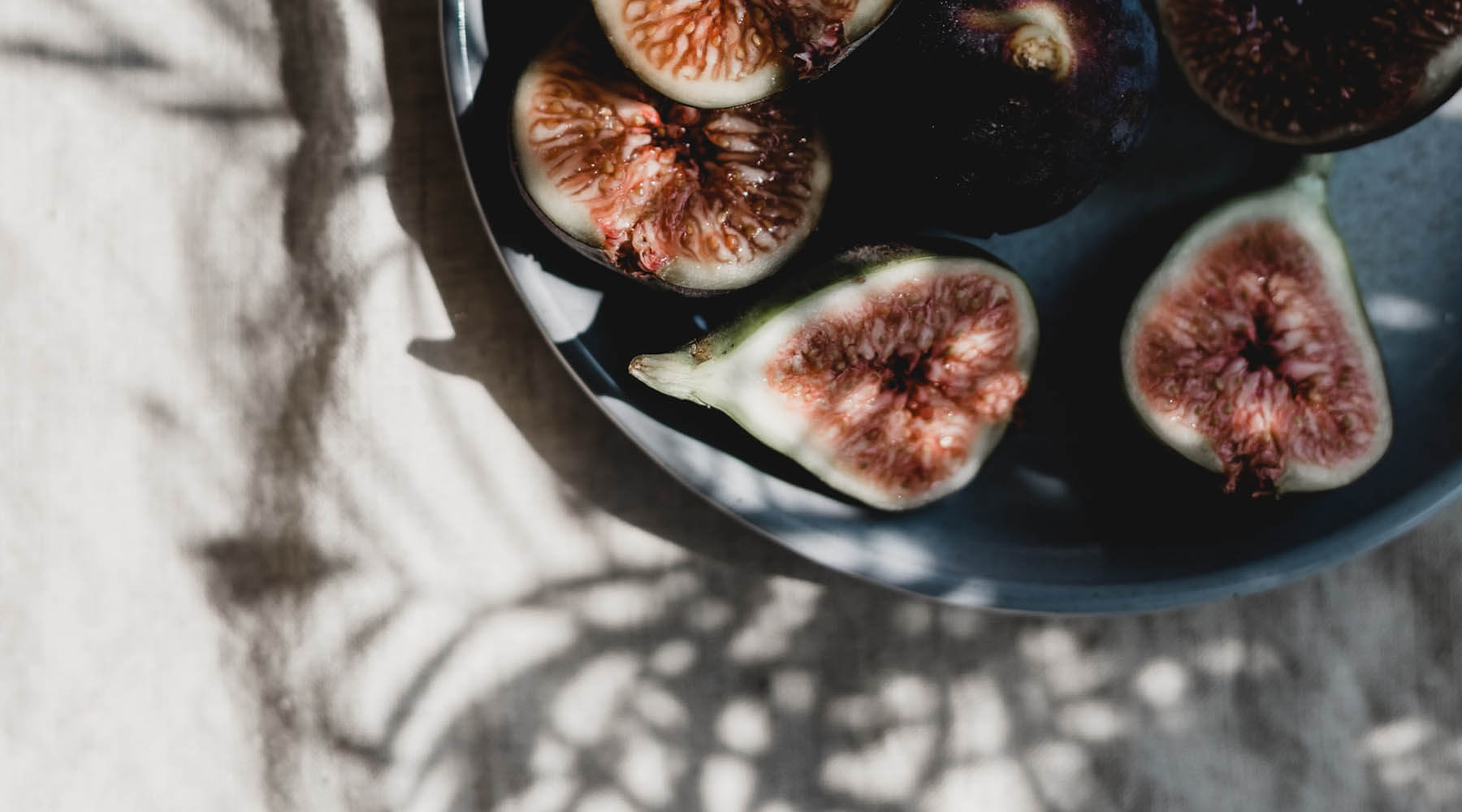 Have you ever traveled around Italy in the peak heat of summer and admired the urbanite Italians scooting down backstreets of Rome or Florence and wondered how they remain so composed, cool and impeccably turned out? Their skin, in contrast to that of many tourists, is somehow without shine despite the heat. Their complexions mat, silky smooth and olive toned; the product of some insider knowledge only they possess and visitors are left guessing at? It’s all in the genes, we say, dismissing their skin health as unattainable.

This isn’t totally the case. There is more than genes, myth and magic lying behind the generally healthly and cared for skin you see among Mediterranean peoples. They use make-up and skincare products in abundance if an Italian pharmacy’s stock of brands is anything to go by. But, they have some good skin building blocks in place first in the form of food; the so-called traditional Mediterranean diet.

Of course, diets are changing in Mediterranean countries, and that’s not good news. Obesity and its related ailments are prevalent even in Olentium’s native Malta. But, thanks to initiatives like the Slow Food Movement, which started in Italy, and greater dietary education within schools, messages about preserving traditional healthy Mediterranean ingredients and ways of eating are getting through.

To be honest, it’s somewhat tongue-in-cheek to say these are ‘secrets’ as much wisdom on the benefits of these ingredients for body and beauty date back thousands of years. Strange then that today we still don’t take this knowledge on board, and include certain of these ancient Mediterranean foods simply and easily into our own diets to boost our overall health, not just that our our skin.

First, it’s worth working out what exactly a Mediterranean diet is and why it has implications for our skincare. Given that UNESCO has inscribed the Mediterranean Diet as intangible ‘Cultural Heritage of Humanity’ it most definitely worth a closer look.

The diet is far more than merely a set of recipes or some special ingredients flung together. It’s a gammut of “skills, knowledge, rituals, symbols and traditions concerning crops, harvesting, fishing, animal husbandry, conservation, processing, cooking, and particularly the sharing and consumption of food,” according to UNESCO.

That last part is particularly interesting given the linkages found between gut-health, brain and skin and which we looked at in our post here. There is certainly something be said for how we go about eating, not just what we eat, when it comes to skincare health. What do we really prefer: a grabbed sandwich on the run or a sit-down with time to savour the food and chat?

UNESCO commented that “Eating together is the foundation of the cultural identity and continuity of communities throughout the Mediterranean basin”. I really believe that lifestyle is one of the greatest ‘secrets’ of the Mediterraneans’ skincare. Many of us just can’t replicate that in our day-to-day lives, but at least if we can sit down and share a meal with a feast of family and friends a few times a week, we’ll be helping our health, and well-being no end. 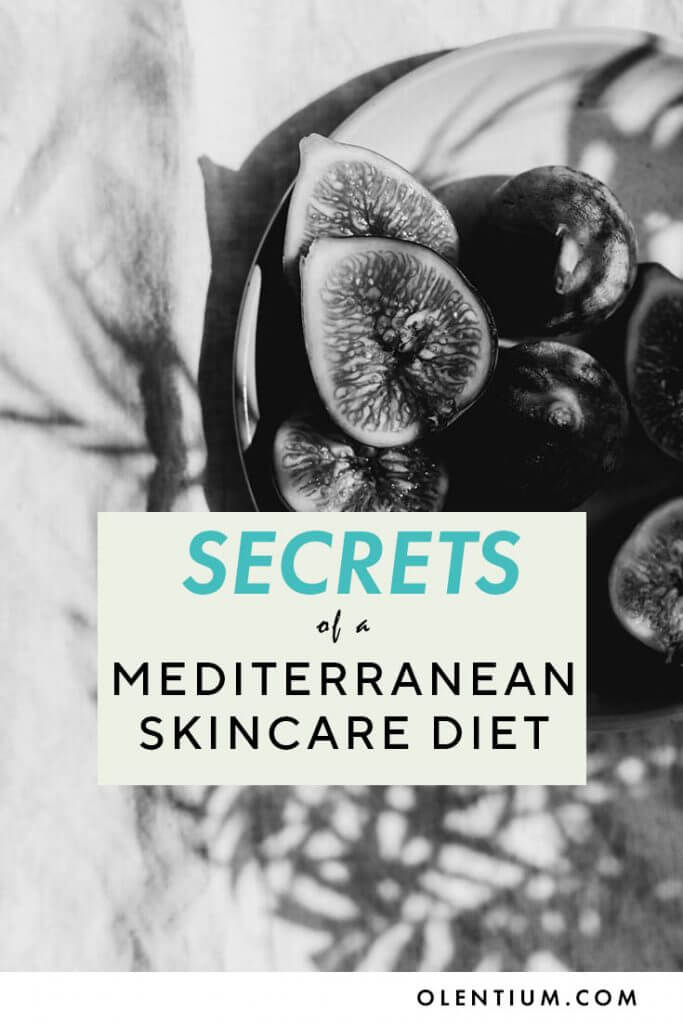 But, I hear you say, what exactly constitutes a Mediterranean diet? Let’s face it, UNESCO called it ‘intangible’.

Firstly, let’s be clear: it’s not a diet that’s a regimen to follow like those aimed at weight loss or sorting out food sensitivities. It’s also not a neat list of ‘wonderfoods’ that the media can treat like a fashion trend. We’ve all seen the coming and going of kale, green smoothies and moringa powder and more. The Mediterranean diet does of course contain numerous wondrous foods, seven of which we’ll be investigating soon. The problem with neatly defining a Mediterranean Diet is the make-up of the region itself: is it a region (land) or a just the sea, for starters?

There’s a world of difference between Lebanese, Spanish, Northern Italian and Tunisian cuisine for instance. Some Mediterranean countries and cultures eat more fish; others more lamb. While some eat sea fish and those living inland stick to lake fish. Some regions use couscous, others pasta. You see now why Mediterranean diet is not really ideal for a fashionable recipe book title or ever likely to ‘trend’ on social media.

But, there is some cohesion and consistency for all the confusion, and it’s here that we must focus to find out those Mediterranean skincare dietary benefits. What underpins most diets and cuisines across the 3700km (2,300 miles) east-west of the Mediterranean and the 1370km north-south at its widest) are these points:

Why are these important?

Simplicity, using just a limited range of well-known and understood ingredients, means not overloading the body with a barrage of competing dietary elements. The ingredients would be well tolerated by people, having been grown locally for hundreds if not thousands of years. Less gut strain, less overload, easier digestion: all elements which add up to a functioning metabolism and easier absorption of the key nutrients our bodies, and our skin need.

By using seasonal and locally-grown or farmed raw ingredients means eating product at its freshest and in most nutritious state. Again, that’s the optimal way to source meat and vegetables.

I’d class socialising and street foods together as they both suggest the well-being that comes from sharing meals. Street foods too are generally from very local ingredients and would have nourished Mediterranean people on the move, going about their work and play, for centuries. Again, we’re talking foodstuffs that are well tolerated and known.

There are numerous ingredients that are commonly eaten across the Mediterranean region, but often it’s how they are used and in what quantities that defines the diet as being different from Northern European or Western diets’ use of them. These are some of the commonalities:

A final bullet point could be about desserts and sweets eaten in moderation, and only on high days and holidays. No cuisine has no sweet treats! Who doesn’t know of some of the Mediterranean’s desserts like Sicilian cassata or of the eastern Mediterranean’s honey-laden baklava or helwa, a sesame seed and honey sweet?

It’s these basic, everyday native ingredients of the Mediterranean that gave the labourer or farmer of old his ‘cucina povera’ – poor man’s cooking – that was frugal but super sustaining. Many of these ingredients are now under scrutiny as their super nutrients are researched and identified as potential rich sources of anti-oxidents, as having cancer-inhibiting properties, and for their ‘good fats’ that help reduce cholesterol and more.

The Mediterranean diet then is far more about boosting your overall sense of well-being and learning how to make healthier food choices without giving up on taste and flavour (that are often souped up with added salt and sugar anyway in much of what we buy packaged and processed).

In this bewildering world of chasing super foods, to make up for our less than healthy lifestyles and assuage our guilt, I like to think of Mediterranean Skincare Diet as Ancient Wonders of the Food World – ingredients that have stood the test of time and have fed generations properly rather than been presented as or singled out for special superfood status.

These skin foods have been quietly present for centuries as props to sensible nutrition that was noted by Hippocrates and known by millions of Mediterranean women producing meals for hungry families over the centuries. What’s not to love about really easy to find and use skin foods that give you an all-round healthy glow, inside and out?

We unravel the secrets of a Mediterranean skincare diet and show how superfoods of the ancients nourish your skin and wellness inside and out.

Subscribe for news of our launch and special offers.

it goes without saying that the symbol of the Medi

Summer might be going, going, gone, or long gone f

The Mediterranean, a vast region of sea and land,

"There is only one day left, always starting over:

After the first rains. I woke to discover the moon

Save the date! We launch autumn '21. Dismiss