Olive oil benefits in skincare have been documented since ancient times and it is probably the first oil to have been used in beautifying treatments. This liquid green-gold has been used for millennia for cooking, lighting, preserving, anointing and in sacred rituals. In fact, there is no better icon to define the Mediterranean than the olive. Where the olive grows  – the ‘olive zone’ – often pins down the rather vague boundaries of the Mediterranean region. It is a land or sea? Just see where olives have been in continuous cultivation for anything up to 8,000 years, you’ll have the Mediterranean mapped.

The Maltese Islands, the home of Olentium, have their own fascinating slice of olive oil history to tell. The olives in these photos lie hidden across rough fields and are hard to track down, thankfully; they have been carbon dated to being around 1000 years old, and are now protected heritage. The chances are they are descendants of a Roman olive grove that was on the same spot.  Remains of a large Roman agricultural settlement were discovered nearby showing evidence of olive oil production. The ancient milling stone survives.

These particular trees, with enormous girths and wispy new growth on their 1000 year-old trunks, have been meticulously, scientifically examined and found to be a genus unique to Malta. Their leaves contain antibacterial properties, also unique to these ancient beauties. Researchers found that the level of these trees’ natural antibacterial elements was so high that it proved a natural barrier to the normally destructive fruit fly whose eggs couldn’t survive on it.

Through a project started a few years back to reintroduce this native olive, many farmers are planting groves to reintroduce this amazing trees to the Maltese landscape. Who knows which Roman galley from where brought the olive to Malta, but whatever it’s provenance, it took on native characteristics and is now in a league of its own.

Malta’s place names echo the Islands’ ancient connection to the olive. One village is called ‘Zejtun’ – from the Sicilian Arabic for “olive”- zaytun, whose etymology also stems from similar sounding words for oil in Spanish and Portuguese, “aceituna” and “azeituna” respectively.  Two other villages are called ‘Zebbug’, which means olive in Maltese.

Today, Maltese olive oil, while not produced in volume, is among the best in the Mediterranean. Given the islands’ smallness, olive groves are always within a blast of salty sea breeze, which gives the olives an amazing tang.

The time from tree to first cold pressing (the best olive oil you can get!) is also very short, so oil runs from the presses and is bottled almost within an hour or less from the harvesting.

Olive oil benefits to the body within

Almost daily, research into olive oil produces evidence of its unique properties and its effect on our health and in fighting certain chronic diseases. Regular consumption of olive oil – generally 2 tbsps a day – within a Mediterranean diet, has been shown to be effective in preventing and in reducing the effects of various chronic diseases, such as coronary heart disease, Alzheimers and certain cancers as well as in promoting healthy ageing*. Health claims have focused mostly on olive oil’s fatty acids (EFAs). Research is turning its attention more now to Extra Virgin Olive Oil’s (EVOO’s) phenols (organic compounds) whose key health-beneficial properties include:

Of course, the properties that help inner health can aid outer beauty too.

From Cleopatra to athletes of ancient Greece, olive oil has been used either to beautify or for medical reasons on the outer body too. Obviously, its high viscosity, it acts as an occlusive layer, retaining moisture within the skin. It is in fact too heavy to use alone for contemporary taste in body products. You will generally find it mixed with a neutral and lighter oil such as sweet almond or grapeseed, or even jojoba. It also has that deep green, even murky colour – especially if its the real deal and from a first cold pressing – called Extra Virgin olive oil. 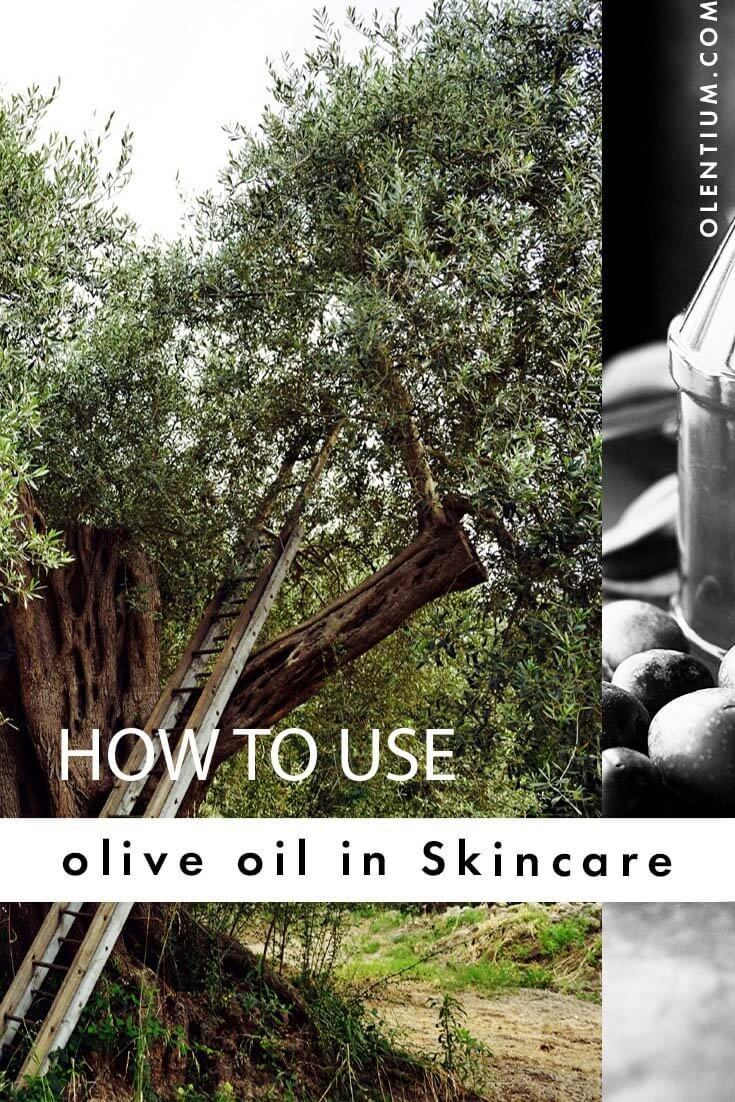 Olive oil is a useful addition in anti-ageing skincare given its high Vitamin E content and antioxidant properties which help fight free radical destruction of skin cells in ageing.  Olive oil’s exceptionally high level of these antioxidant polyphenols – the phytochemicals that are so under investigation for dietary reasons too – give olive oil its exception anti-inflammatory and antibacterial properties. While it is therefore seems a good oil to include in creams aimed at acne sufferers or those with outbreaks, there has been very little authenticated research into its effects on these types of skin.

Note that the exceptional benefits are found in far higher amounts in first cold-pressed olive oil and not subsequent, later runs through the presses. First cold-press oil is of course more expensive, and all the more so if you opt for organic.

Olive oil is also high in oleic and linoleic acids (between 55 and 83 per cent) – both essential fatty acids that the body can’t produce yet needs. Generally, this is considered beneficial and especially so if you’re consuming olive oil as it will act on reducing LDL (bad cholesterol).

Contra Indications: However, there has been some research that indicates that olive oil can bring about redness and cause reactions on some skin types; notably dry, baby’s or sensitive skin. It can also have the effect of aiding, not preventing water loss from the skin in these skin types. There is a good in-depth but readable overview of olive oil in skincare here and see further reading below.

How we olive oil in our natural skincare

You can’t live in the Mediterranean and produce natural skincare without being attracted to the olive right outside your door. Bearing in mind the contra-indicative study mentioned above, at Olentium we use it sparingly, also because it is heavy to handle and has that wonderful-in-food, but not so easy to work with in skincare scent. It’s a go-to in our body lotions but we don’t use it in our face preparations where it might clog pores. Either way, we use it in low amounts and always blended with other, lighter carrier oils such as our favourite – also a Mediterranean product – sweet almond oil.  We source all our carrier oils are locally as possible – from Sicily in the case of olive and sweet almond – as Malta can’t grant authentic organic status as the islands are too small to prevent cross-contamination.

Overall, there is good reason to love the olive! For inner and outer wellness and beauty. I must just close by saying that my grandmother, who had amazing skin into her 90s, used only two products for skincare – a very basic soap and a tablespoon of olive oil rubbed in each night.

The benefits of olive oil in skincare have been known ancient times. We look at how to use olive oil in your natural skincare routine.

Inscribe your name in our registry for news of our spring '21 launch aromatic oils and waters for face and body rituals.