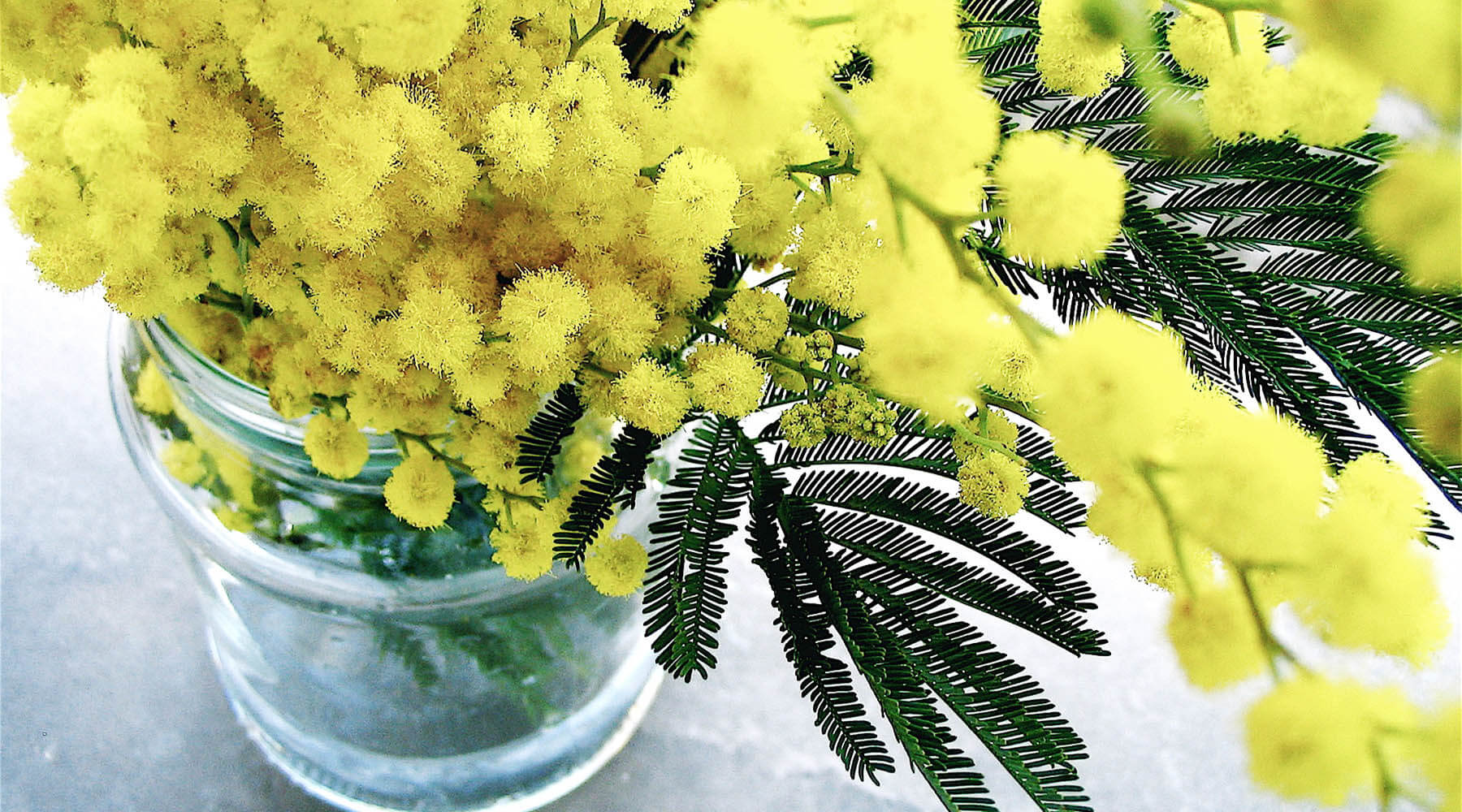 Mimosa is a signature spring flowering tree in the Mediterranean. Its herbal, sweet, honey scent is gorgeous as a mid note in perfumes, our signature Acqua di Olentium eau de parfum included. Discover more in this mini guide to mimosa in skincare and scent.

Mimosa, with its frothy pompoms of effervescent yellows ranging from light lemon in full sun to deep gold as evening sets in, is giving us its annual spring show here in our neck of the Mediterranean. Even among all the season’s fields of yellow wayside flowers, the Mimosa stands out.

It is hard to believe it is a non-native of the Mediterranean. And even if you’ve never seen a Mimosa tree up close and personal on an Easter or late spring holiday in the Mediterranean, the chances are that an element of it is sitting right now on your bathroom shelf.

Because Mimosa (Acacia dealbata), also called Cassia, is much loved in the perfume industry. With its long lingering base notes – thanks to the acacia’s farnesol component – ranging from gently sweet and floral at times to woody and musty, I find it a hard scent to pin down. It’s certainly warming, calming and pleasing.

While there are around 1,300 genus of Acacia, some are more famous than others and only two species are generally used in the perfume industry. It is in so many well-known brand name perfumes, I’ll just point you to a good long list of them here.

The acacia in Malta, where Olentium is based, is the Acacia pycnantha; a long leafed variety called the Golden Wattle in Australia where it is the national floral emblem.

Common in Malta too, though found less on our waysides and rough land and more in laid-out, palace gardens is the pinate-leafed Acacia Farnesiana.

This particular Acacia is one used in the perfume industry and is named after Odoardo Farnese, an Italian nobleman from a family of dukes and cardinals who owned one of Rome’s most imposing grand buildings, Palazzo Farnese – now the French Embassy – as well as one of Europe’s first botanical gardens. The Farnese family imported the acacia from South America.

A quick side note: if you happen to be in Rome, do as all the tourists do and peer up and in at Palazzo Farnese’s amazing frescoes painted by Annibale Carraci between 1597-1602. Best viewed after dark as the kind French diplomats keep shutters open and lights on!

Onward to mimosa and its benefits as a skincare, rather than perfumery, ingredient.

The essential oil Mimosa absolute is extracted from both the pompom flowers and the leaves. It is a good all-rounder for most skin types and in freshening up dull skin. Mimosa oil is particularly beneficial to oily as well as sensitive skins or those with irritation (1).

Looking at mimosa for its skincare properties, and delving into Mimosa oil’s phytochemistry a bit more (3), we find that one of the oil’s key constituents Lupeol has been shown to have anti-inflammatory action. Mimosa flower oil is also an emollient.

Aromatherapy uses Mimosa Flower Oil for its calming, harmonizing and relaxation-inducing properties (3). It is uplifting and peaceful; a nod to how it makes one feel on seeing its shimmering festoon of golden flowers.

There’s nothing not to like about Mimosa in skincare really. For all its showy exterior as an ornamental shrubby tree, Mimosa is a hard-working, natural skincare ingredient that we are including in several of our products.

Mediterranean by naturalisation, Mimosa, Acacia or Cassia, whichever name you know it by, is one non-native we’re certainly glad we included in Acqua di Olentium where its honey sweetness reminds us of hot limestone on hot spring days.

For more details on the constituent ingredients and history of Mimosa varieties, see Perfume Shrine.